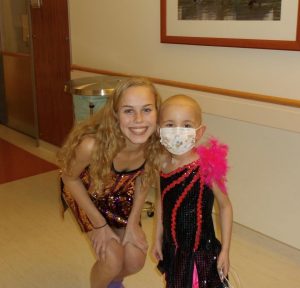 Ashley Brinkman, a nurse at the UNC Pediatric Hematology-Oncology Clinic, is a living example of the power that CPALS has to change lives. Ashley is a UNC graduate, and she was a CPAL for 5 years. A few weeks ago, she shared with me the story of a college freshman who joined a club that completely changed the trajectory of her career and life.

Ashley grew up in Durham, NC, and attended UNC for undergrad and nursing school. She had done a lot of volunteering with the Red Cross in high school and knew she wanted to pursue a career in the medical field. She started off as pre-pharmacy but soon realized that it wasn’t the right path for her. Looking for a new interest, she tried volunteering at UNC Hospitals, but unfortunately, the only open position was in the gift shop. However, during her interview to volunteer at the gift shop, she was introduced to our organization, CPALS. She immediately decided to join and soon had a clinic shift every Friday at 7:30 AM. Though she had to endure the early morning walk all the way from Aycock residence hall to the hospital, she fell in love with the kids and the community of the clinic. When reminiscing on her first encounter with the clinic, she said,

“Going into it I think a lot of people feel intimidated, but I just remember thinking that it was surprisingly such a happy place.”

Ashley brought to light an aspect of CPALS that hasn’t yet been touched on in these blogs: the support it provides to parents. Ashley noted,

“It was really nice just being there to be able to play with them and distract them and give their parents a breather, to let them sit and talk to other adults who are experiencing the same thing.”

It is so important to remember that although the main focus of CPALS is on the patients, the families are also involved and impacted by what we do as well. CPALS strengthens the community of the clinic through family and staff support through their willingness to devote time and effort to people they previously had no connection with.

In the winter of her sophomore year, Ashley was matched with her first pal. Living in Durham, close to campus, she was one of the few CPALS able to volunteer over winter break. Her pal was getting a bone marrow transplant, and Ashley went to visit her almost every single day. It was clear how big of an impression her first pal made on her, as even nine years later she remembers small details of their time together.

“I just fell in love with her. She was the cutest, most brave little girl. I started to make theme days, like one day I went in my pajamas and we had a little popcorn and movie night. One day I brought some of my old dance costumes and we dressed up. She had such good spirits through it all, and I mean she felt bad some days but she always wanted to play.” 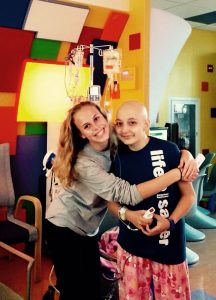 Ashley had a few more short-term pals throughout her undergraduate experience, but during her senior year, she was matched with another pal receiving a bone marrow transplant. This time her pal was older, which she says was a completely different experience.

“I shared her with another pal and we switched off every other day. It was a lot more like I would have to go some days and just be like an ear for her, you know just to vent to, which I think was really good in a different sense. I was a consistent person for her to be able to reach out to just kind of as her friend, not as someone who is trying to give her medicine or tell her news.”

In addition to being matched with several pals and working in the hospital clinic, Ashley was also very involved with CPALS’ biannual Victory Junction retreat through her role in its planning committee. The accumulation of all of these experiences allowed her to narrow the wide realm of medicinal careers to a focus in nursing:

“I really think that, still to this day, CPALS is what got me into nursing, for the most part. Being in the clinic and just seeing the nursing interaction with the kids, building relationships with the families, and knowing that these kids come so often, the staff really becomes your family. It’s a big unit. Everyone works together, and I really loved that.”

Building relationships with her patients over time became very important to her, and she liked being able to provide some light on these patients’ darker days.

Ashley went to UNC for nursing school and was always very interested in pediatrics, specifically through her experience working as a volunteer at UNC children’s. She had the amazing opportunity to complete a summer externship with Duke Hospitals’ Pediatric ICU. When she graduated, she was able to secure job offers from both places and found herself battling with a tough decision. While working at UNC Children’s Hospital was her dream, she decided to take her professional career to Duke’s PICU. Describing her thought process behind this decision, she stated

“I decided to start in the PICU because my thought process was that while I am young and learning, I wanted to work in the ICU to kind of soak up all of that information. I also wanted to do the crazy schedule and the crazy energy and experience while I’m young.”

After two and half years in Duke’s PICU, Ashley applied for an opening at the pediatric oncology clinic at UNC and got the job. She was able to fulfill her dream of working for UNC Hospitals’ Children’s Unit and has been working in the clinic ever since.

When asked about her most impactful memory as a CPAL, she said, 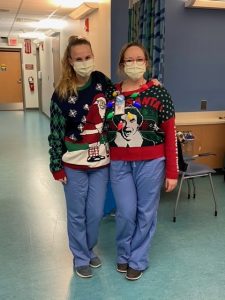 “The teenager I talked about in my last year, I remember she went back into surgery, and she was like ‘please stay until I wake up’. It took an hour or two but I waited and I remember when she woke up, she said ‘you’re still here, thank you so much for staying’. I literally just sat in a room instead of going home but for her that was so meaningful, and it just shows that even the little things we do for our pals really make their day better.”

Ashley’s story is invaluable because of its accurate representation of CPALS’ long-lasting impact on its members. While our mission is dedicated to the patients and their families throughout the treatment/recovery process, the bandwidth of CPALS’ influence on others spreads beyond this – it encompasses and touches the lives of child life specialists, nurses, and, as we saw from Ashley’s experience, undergraduate students.